Concordat with the Vatican: Causes and Consequences

Ukraine's power is to sign an agreement with the Vatican, which will give RCC and Uniates special rights. What is behind the document and in front of the Orthodox?

On February 9, 2022, a draft concordat (agreement) between Ukraine and the Vatican was published on the Internet, which regulates the legal status of Catholics in our country.

If the document is officially signed, it will put the Catholic and Greek Catholic Churches of Ukraine in a special position, as our state has not agreed on anything with other Christian churches and denominations.

It is clear that each of the parties views the concordat in terms of benefits and hopes for certain preferences. Which ones? Let's figure it out.

Before the presidential election, Vladimir Zelensky stressed his neutral attitude to religious issues in Ukraine. As President of the country, he remained faithful to his position – not to interfere in the affairs of the Church – for a long time.

However, after some time, Zelensky began to change his religious policy. Probably against the background of falling popular support, perhaps after consultations with "experts", but the President got engaged very closely with both Phanar and the Vatican. True though, he does not yet participate (like Poroshenko) in the services of any particular denomination, but there is no longer the neutrality he used to declare.

One thing is for sure – Zelensky's favorite denomination is definitely not the UOC. What he will choose – Catholics (Uniates – also part of the RCC) or the OCU – that’s the question. Now there are signals that this choice will not be in favor of Dumenko’s religious structure given a possible concordat with the Vatican.

First, Zelensky knows that during the presidential election, the OCU was very active in supporting Poroshenko, and some of its representatives still speak disparagingly of both Zelensky and his team. One should not expect that their aggressive rhetoric towards the "Servant of the People" will change. It won’t. This means there will be no support from the OCU in the upcoming elections.

Second, Zelensky was probably told that by signing the concordat he would be able to attract to his side the voters of western Ukraine, who, in the vast majority, represent the UGCC and the RCC. Yes, they were in Poroshenko’s camp before, but Zelensky's embrace with the Vatican can change everything now.

Third, the agreement with the Vatican sounds not only "cooler", but also looks more "European" than the Turkish-Ukrainian Tomos. It will hence give voters a clear understanding that Ukraine is confidently moving towards a "bright European future".

Fourth, if the Head of State signs an agreement with the Holy See, he will have the right to count on visible support from the Vatican.

The agreement with the Vatican sounds not only "cooler", but also looks more "European" than the Turkish-Ukrainian Tomos.

On the other hand, one has to pay for support, and the fee has apparently already been set.

How will Ukraine pay the Vatican?

In the draft concordat, the preferences that Ukrainian Catholics and Uniates will receive are spelled out quite clearly.

But the main interest of the RCC is Article 14 of the future document, which prescribes "to negotiate a decision acceptable to the parties regarding the property confiscated by the Soviet authorities from the Catholic Church." Simply put, the state will give the Uniates and Catholics all the property seized by the Soviet government.

Given that there is still no law on restitution in Ukraine, this item may cause serious interfaith problems, as the RCC already claims a number of facilities in the country. We are also talking about shrines belonging to the Orthodox Church. For example, the Uniates have repeatedly claimed their rights to the Pochaiv Lavra. Naturally, these claims are completely unfounded, but their recent intensification is not accidental.

The State will give to the Uniates and Catholics all the property confiscated by the Soviet government.

Be that as it may, but even from this brief overview of some provisions of the six-page document, it is obvious that the signing of the concordat will significantly strengthen the position of Catholics and Uniates in Ukraine. Throughout the country, they will be able to act as they do now in the west of the country – brazenly regardless of democratic norms and the rights of other religious denominations. In this sense, we must remember that Uniates bother about looking "European" only where they are in the minority. Otherwise they assume a different look as proven by Kolomyia, Zolochiv or Ivano-Frankivsk.

In other words, the concordat will significantly strengthen the position of Catholics (Uniates) in their struggle against Orthodoxy.

However, the concordat is needed by Catholics and Greek Catholics not only to secure special rights in Ukraine, but also to continue its "advance to the East" to those regions of the country where they have never been historically.

Back in 2016, in his sermon on the occasion of Pentecost, the head of the Ukrainian Uniates Sviatoslav Shevchuk stated the need to "advance" to eastern Ukraine, which, in his opinion, is waiting for the arrival of "believing Christians". According to Shevchuk, this intention was personally approved by Pope Francis and Cardinal Pietro Parolin.

Shevchuk's position was re-affirmed and strengthened by Andrei Yurash, the newly appointed Ambassador of Ukraine to the Vatican. According to him, the Apostolic See needs our country to carry out its mission throughout Eastern Europe: "I am convinced that Ukraine will not do without outreach, communication, interaction, regular exchange of messages, spiritual epistles with the Vatican."

In other words, the Catholicization of Eastern Europe, including certain territories of Russia, is impossible without Ukraine.

The signing of the concordat will also help the Vatican to more actively involve Ukraine in the development of ecumenical relations with Phanar. In this sense, the leading positions will have to be taken by Ukrainian Uniates. According to Sviatoslav Shevchuk, "the next step (after the establishment of the OCU – Ed.) is the ecumenical dialogue between the UGCC and the united Ukrainian Orthodoxy in the direction of restoring the original unity of this Church." While earlier supporters of the OCU stated that Greek Catholics would join the newly formed church, later it became clear that Dumenko and his structure played a secondary role in the ecumenical movement. Everything is decided by the Vatican and Phanar.

At the same time, the signing of the concordat will deprive the OCU not only of the initiative in the issue of union with Catholics, but also of the status of the "state church", which this structure now associates itself with. After the agreement between the Vatican and Ukraine, it is the Uniates who will take over the current functions of the OCU in relations with the authorities and will also be able to act from the position of strength in a "dialogue" with the Dumenkovites. Moreover, the ultimate goal of this "dialogue" is clearly indicated – the recognition of the supremacy of Rome.

What should the UOC expect?

To begin with, let us emphasize that the concordat is in direct contradiction with Article 5 of the Law of Ukraine "On Freedom of Conscience and Religious Organizations."

If the concordat is signed, by and large the Law on Freedom of Conscience and Religious Organizations will de facto cease to exist.

Consequently, if the concordat is signed, by and large the Law on Freedom of Conscience and Religious Organizations will de facto cease to exist.

This means that the already difficult situation of our Church will only get worse. And if today in the fight against the UOC the Law of Ukraine is practically not taken into account, the agreement with the Vatican will serve as a trigger for a more powerful attack on the Church. Thus, the threat of restitution will give the authorities another lever of pressure on the UOC, and the Uniates will be able to appease their appetites by referring to the concordat. There can be no doubt that attempts will be made to take away “their” shrines from the believers of the canonical Church. It is easy to guess what these attempts will result in – the growth of religious confrontation and violence.

In addition, the Vatican-Ukrainian treaty not only attaches special rights to Uniates and Catholics, but also serves as another barrier to destroying the cultural and spiritual unity of the Orthodox Slavic peoples. Perhaps for this reason, Andrei Yurash, a man who has proved himself in the struggle against the Church, was appointed Ambassador of Ukraine to the Vatican. In any case, the concordat can bring nothing good to the UOC.

The consolation in this situation can be the fact that any problems only make the Church and the believers stronger. A case in point – recent events around the Tomos, which got the UOC believers to act with a single heart and with one mouth.

Fight against the Church: from the "enemy" image to a razor to the throat 03 January 14:14
News

31 2023
30 January 18:52
Primate of the Church in Montenegro: Ukrainian authorities persecute UOC 0
30 January 16:41
Arestovych: Persecution of the Church ends badly for persecutors 0
30 January 16:35
Viatrovych: Those rejecting the Ukrainian church must leave the country 0
30 January 15:34
His Beatitude Onuphry appeals to UN due to discrimination against UOC 0
30 January 15:27
Viatrovych about UOC: No expertise needed, just ban it 0
29 January 19:40
MP: Law against UOC will cause conflicts, but we never mind 0
29 January 16:08
Istanbul: Dumenko leads ecumenical "unity" prayer service at Phanar temple 0
29 January 10:51
NSDC Head: We will not tolerate the UOC kissing Putin on his forehead 0
29 January 10:00
Archbishop Viсtor: There will be no victory until Ukrainians turn to God 0
28 January 14:08
Head of Phanar to Dumenko: Now Pope Francis is closer to you 0
28 January 11:08
SEFC: Half of the facilities affected by the war belong to the UOC 0
27 January 21:45
Phanar head: The entire Kyiv-Pechersk Lavra should become Ukrainian 0
27 January 19:29
MP: Law banning confessions affiliated with Russia to be adopted in March 0
27 January 18:31
UOC Volyn priest takes humanitarian aid collected by eparchy to frontline 0
27 January 17:04
Koran publicly burned in Denmark, police guarding the action 0
All news 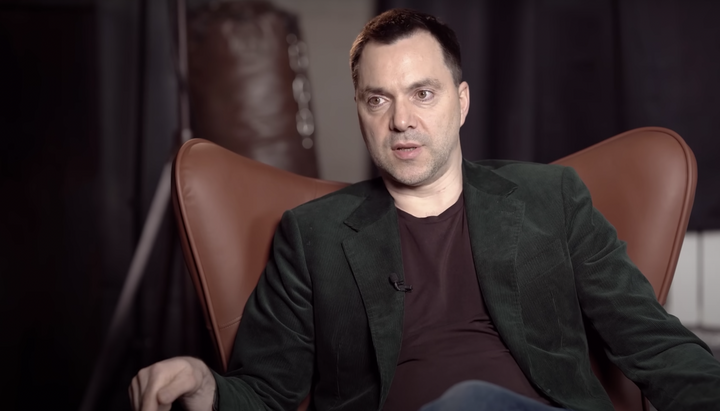 Arestovych: Persecution of the Church ends badly for persecutors
30 January 16:41 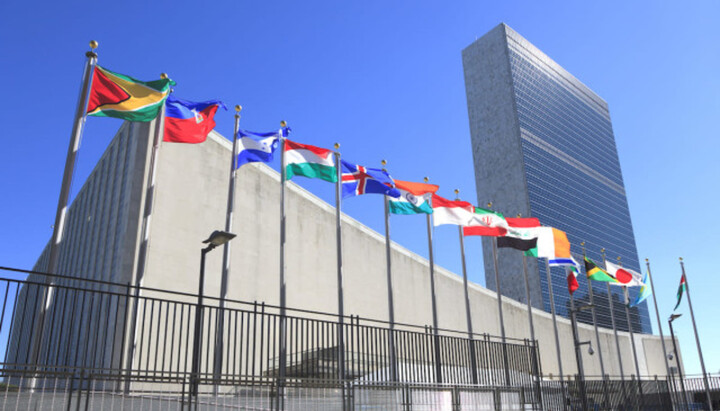 His Beatitude Onuphry appeals to UN due to discrimination against UOC
30 January 15:34
Hot spots