23 November 2022 10:28
0
Author: Yaroslav Nivkin
Did Dumenko carry out a special operation to take over the Lavra? Photo: UOJ

After the "Russian" song scandal at the Lavra provoked by the OCU, the SBU started mass searches of monasteries & eparchies, and Poroshenko's MPs talked of a UOC ban.

On 22 November, the SBU conducted mass searches in monasteries and churches of the Ukrainian Orthodox Church: at the Kyiv-Pechersk Lavra, the Kyiv Zvirynets Monastery, the Korets Convent, the Сonvent of the Volyn Mother of God, and in the premises of the Sarny-Polissia Eparchy of the Ukrainian Orthodox Church. The law enforcers hoped to find saboteurs and weapons there. It sounds more than absurd, but these are the exact wording of the official resources of the SBU.

The reason for the searches was the investigation into the singing in one of the churches of the Kyiv-Pechersk Lavra, where the words "bells ringing is rising over Russia, Mother Rus’ is awakening" were used.

A video of the singing was recorded and published in mid-November by OCU members.

This publication had a bombshell effect. The song was discussed in all media and social networks. The SBU opened a criminal case under the article on complicity to the RF’s aggression and glorification of the aggressor. The culture minister said that "in case the video turns out to be authentic", procedural actions against the UOC leadership should be launched immediately. Several monasteries of the UOC have been searched at once. Well, the glorification of Russia in churches, especially in a time of war is completely inappropriate. But was there a fact of glorification? And what is this song like? It is called "The Song to the Most Holy Mother of God".

"Our Lady, Our Lady,
Mother of light, love and good,
You are my hope, Mother of God,
And the time of miraculous revelations."

The text is very long and is essentially a prayer to the Mother of God asking for protection. It says of the icons of Our Lady and also describes the erection of temples dedicated to Her. The song was written in the early 2000s (the time of the revival of faith after the collapse of the USSR), therefore the author used the words "Mother Russia is being reborn". That is, it is not about the revival of the empire or Putin. The lyrics of the song are about spirituality and faith. What parallels can be drawn here?

The same concerns Rus’. The absurd and unjust war the current Russian authorities are waging against the Ukrainians does not negate the fact that the greatest saints of the Church lived there: Seraphim of Sarov, Sergius of Radonezh, the Fathers of the Optina Hermitage and thousands of others. They cannot be held responsible for the actions of Putin or Shoigu. These saints have been and will be revered by the Ukrainian Orthodox Church. To prosecute for singing a song about Russia is the same as to accuse pilgrims to Jerusalem of aiding the Muslim terrorists living in this land.

The UOC's believers are fighting for their land at the front, dying from the enemy's shells in peaceful cities, suffering without light, water and heat like everybody else. To accuse them of collaborating with the enemy is absurd. But this is in objective reality.

But the reality of the OCU is very different.

The war for them is a golden time. By inciting hatred against the UOC, with the help of fake meetings, local authorities and church seizures, Dumenko has managed to "transfer" hundreds of temples of the Ukrainian Orthodox Church to his structure since February. But the main shrines still remain with the UOC.

Claims on the Kyiv-Pechersk Lavra have been made many times by Dumenko.

Serhiy Dumenko: "The Ukrainian Church must be present at the Kyiv-Pechersk Lavra. And so it will be, it is an irreversible process".

And in May, the OCU "synod" set up a fake organization called the Kyiv-Pechersk Lavra and demanded that the authorities give it at least one temple in the Upper Lavra. But there was no positive answer.

The head of the State Ethnopolitics Committee, Olena Bohdan, then indirectly hinted that the OCU does not need the Lavra because Dumenko has no monks to inhabit it.

Olena Bohdan: "The number of monks in Kyiv OCU, has anyone wondered how many monks there are in Kyiv? Fewer than 50. There are more than 200 monks only in the Kyiv-Pechersk Lavra of the UOC. In total, there are more than 600 people together with seminarians in the Lavra residence. Therefore, if we talk about some changes to the Kyiv-Pechersk Lavra, about 600 people will have to go out of there and new people will come in."

Moreover, right across the street from the Lavra, the OCU has the St. Theodosius Monastery. And it's not overcrowded during the services, to say the least.

Olena Bohdan: "In the same location (as the Kyiv-Pechersk Lavra – Ed) there is an OCU temple. If you go there for a Sunday service, you will see how many people are there.”

Serhii Dumenko: "It is not the business of officials to comment on such things".

And if the situation with the Lavra is clear to everyone, Dumenko does not care whether services will be held there or not, he needs it simply as a trophy, which is said directly in the UOC.

Metropolitan Clement (Vecheria): "They simply don't have monks physically. Therefore, the OCU needs the Lavra in this case simply as a trophy, to mock.”

Nevertheless, the OCU continued its work on the conquest of the Lavra, just in a different way. And this is how the scandal with the "Russian" singing should be viewed.

The word "Russia" in the "Song to the Mother of God" is only glimpsed at the very end, at 6-7 minutes. It should have been known in advance that this word is there.

That is, the OCU members who shot the video knew exactly which church in the Lavra and when to come and turn on the recording in order to fix the "crime". On Dumenko's part, this is a brilliant special operation that could well launch the process of handing over the Lavra to the OCU. And it seems that this is where the root of the problem should be sought. Dumenko has repeatedly promised that his structure would take over the Kyiv Cave Monastery and has persistently sought ways to do so. And now there is a powerful attack on the UOC.

And now there is systematic work to shake the situation in the country. Poroshenko's MP Honcharenko is writing parliamentary requests to the Cabinet of Ministers demanding that the UOC be kicked out of the Lavra and the OCU be allowed in. Poroshenko's propagandist from Channel 5 demands the same thing. And the day before, other Poroshenko’s MPs also made statements. Mykola Kniazhytskyy wrote a bill to ban the UOC. And one of the fathers of the Tomos, Rostislav Pavlenko, was among the organizers of the round table, where the question of the UOC ban was discussed.

All these people are trying to bring one message to the authorities – the UOC, they say, is marginal and small in number. Its prohibition will not cause any internal confrontations. Let us ban it – and then we will see. Given that hundreds of thousands, if not millions of Ukrainians, consider themselves to be part of the UOC, these words are an obvious lie. And here it is hard not to notice that both Dumenko and Poroshenko are deliberately rocking the church situation to solve their own problems. The OCU has the task of taking away the Lavra, the maximum number of churches and, if possible, destroying the UOC. Poroshenko has the task to try to regain his former status. And the internal turmoil may well help this. Whether the current Ukrainian authorities realize this is a big question. 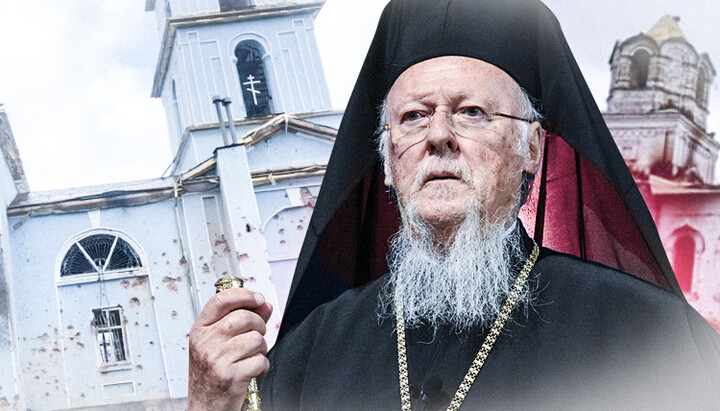