Phanar's cooperation with the CIA: "Ready to make every possible sacrifice"

The media published documents on how the Patriarchate of Constantinople worked with the United States.

On February 7, 2020, the Greek religious site “Romfea”, sympathetic to the Phanar, published an article about the close ties of the CIA with one of the most significant and at the same time most criticized patriarchs of Constantinople of the 20th century, Athenagoras (Spyrou). What do the documents of the secret US Department say and what does the work of Patriarch Athenagoras look like in their light?

The CIA documents referred to by the author of the article appeared in the public domain much earlier, in 2016.

A logical question arises: why did the Greeks pay attention to these documents only now, and why was the relevant article on the pro-Phanar site “Romfea”?

Without going into abstract conspiracy theories, it can be stated that there are different views in the Greek religious community on the Phanar's actions today. Not all Hellenes share the assertion that the Patriarch of Constantinople has the highest primacy in the Orthodox world and that he embodies the "etat of Orthodoxy". Many Greeks understand the dangers of the Orthodox papacy and do not want Constantinople to follow the footsteps of Rome in this respect.

But at the same time, there is a very strong party in the Hellenic environment that places Greek nationalism above religious beliefs, above Orthodoxy itself. Naturally, this party seeks by all available means to assert the primacy of the Patriarch of Constantinople as a symbol of the greatness of the Hellenic race.

The struggle of these parties is reflected in the article on “Romfea” that discredits one of the most prominent patriarchs of Constantinople of the recent past.

Now let's move on to the content of the article itself.

The authors, based on CIA documents, cite an extract from the correspondence of two intelligence agents – Ulius Amoss and David Burns. It follows that in 1942 Athenagoras (Spyrou), being the Archbishop of the American Archdiocese of the Patriarchate of Constantinople, offered services of the Church to the CIA. "He told me that all the services of his organization were at our disposal," the agent wrote. Archbishop Athenagoras specifies that his "subordinates" were prepared to execute absolutely any instructions of the American authorities, the CIA in particular: "I have three bishops, three hundred priests and a large and widely spread organization. Those who are under my orders are obedient to you! You can arrange them for whatever service you need. There will be no questions and your instructions will be faithfully executed. Please tell Mr. Burns that this is true of me."

The correspondence further reveals some of the details of services provided to the CIA by "Athenagoras’s organization". The Archbishop of the Greek Archdiocese of North and South America actually disclosed personal information on 100,000 parishioners to the CIA. The case was during World War II, and the US authorities needed recruits to send to the battlefields in Europe. The fight against Nazism is definitely the just cause, but on the part of the head of the Archdiocese, it looked like a betrayal. After all, these young people could have gone to the front voluntarily. Instead, they were most likely to be just caught on a tip-off by Archbishop Athenagoras.

"I have three bishops, three hundred priests and a large and widely spread organization. Those who are under my orders are obedient to you! You can arrange them for whatever service you need."

For this, Archbishop Athenagoras received a thanksgiving note from the then CIA chief William J. Donovan. In response, he wrote, "I am ready to submit myself to any task and to make every possible sacrifice for our beloved country, which is striving for Global Freedom and Justice and the New Day to come.” It is impossible to imagine that such words were written by a religious man, and even more so by an Orthodox Archbishop. How can one understand the readiness to submit to "any task"? And what sacrifices did Archbishop Athenagoras intend to make for his beloved United States?

It is quite possible that the published correspondence is just the tip of the iceberg, and that the cooperation between Athenagoras and the U.S. intelligence agencies was more multilateral. But from what has become known, it becomes clear: Athenagoras expressed his willingness to fully execute any CIA order, without asking unnecessary questions.

The activity of Athenagoras as Patriarch of Constantinople was characterized by three key points:

As a matter of fact, Athenagoras was appointed as Patriarch to oppose the Moscow Patriarchate because his predecessor Patriarch Maximus V expressed certain sympathy for the ROC. In 1946, he resumed the custom according to which the diplomatic representative of Russia (USSR) escorted the Patriarch of Constantinople from his residence to the temple on Easter night. Also, he sent an official delegation of the Patriarchate of Constantinople to celebrate the 500th anniversary of the autocephaly of the ROC in 1948. For his 'leftist' opinions and ties with the Moscow Patriarchate, he was forced to write a letter of resignation, declared insane and kept under surveillance in Chambésy (Phanar’s residence in Switzerland), banned to perform divine services.

Athenagoras, on the other hand, never concealed his anti-Russian sentiments. Before becoming Patriarch in 1947, he said, "America is helping Turkey and Greece because it knows that these two states must fight against a wild beast that threatens mankind.” Enthroned, he fully met the expectations of his patrons in Washington.

Under Patriarch Athenagoras, the idea of the Phanar's domination over the entire Orthodox diaspora was given a new impetus. In the Phanar’s ideological interpretation, it was called "overcoming the narrow national character of Greek Orthodoxy. And in practice, it resulted in the interference in the affairs of other Local Churches.

In 1952, Patriarch Athenagoras announced the convocation of the "Pan-Orthodox Great and Holy Council" and began active preparation for it. This initiative and the Phanar’s active coordination activities in the preparation of the Council contributed to the spread of the false belief that only the Patriarchs of Constantinople can convene Pan-Orthodox Councils.

Under Patriarch Athenagoras, the idea of the Phanar's domination over the entire Orthodox diaspora was given a new impetus.

As for the rapprochement with the Vatican, Patriarch Athenagoras took a historic step: in 1965, he and Pope Paul VI removed the mutual anathemas that were imposed back in 1054, when the official break-up of Orthodoxy and Catholicism took place. In his letter on this occasion, Athenagoras wrote: "In 1054, by the mysterious will of God, a storm came down on the Church: relations between the Churches of Rome and Constantinople were tested, and the love that held them together was so badly wounded that anathema appeared in the bosoms of the Churches of God. <...> But since today God's goodwill towards us has shown itself, showing the way of reconciliation, especially in the mutual zeal, blessed and fruitful, both from Old and from our New Rome, in the development of brotherly relations, it was decided to begin to correct the opinion about the past events and to overcome, as far as possible for each of the Churches, the built-up obstacles that can be removed.”

The message does not contain a word about the heretical delusions of the Latins, nor a word about the fact that the Orthodox Church realizes itself as "One, Holy, Catholic and Apostolic Church".

And on the eve of the anathema "removal", Patriarch Athenagoras met with Pope Paul VI in Jerusalem for the first time in 500 years.

It is noteworthy that in Greek iconography there is even an iconographic image of this meeting: 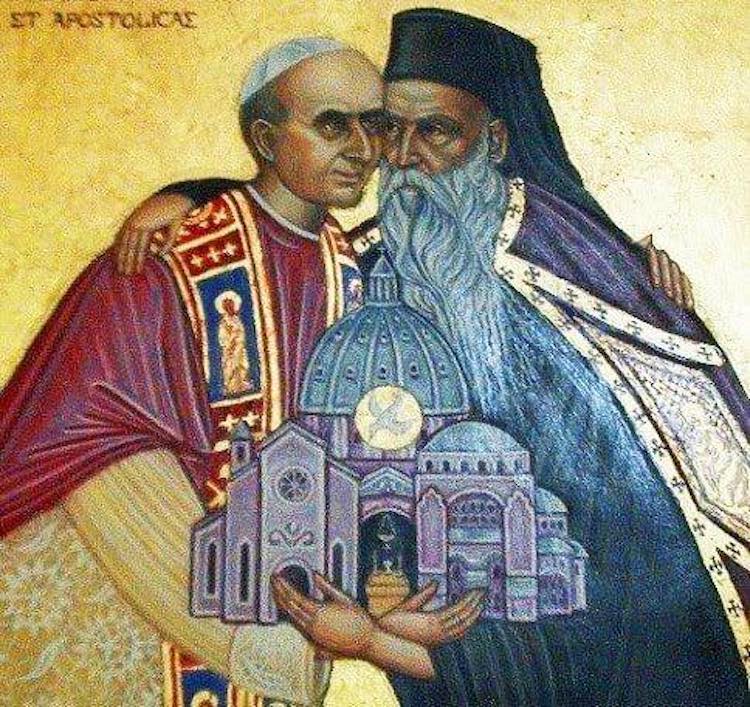 Patriarch Athenagoras's attitude to heresies is also known. The French historian and theologian Olivier Clément in his book "Conversations with Patriarch Athenagoras" quotes his words about heresies: "And I do not see them (heresies – Ed.) anywhere! I see only truths, partial, curtailed, sometimes out of place and claiming to grasp and encapsulate the inexhaustible mystery".

Now let's remember how Athenagoras assured the head of the CIA, William J. Donovan, that he was "ready to submit himself to any task and make every possible sacrifice" and let's ask ourselves a question: was all this activity of Patriarch Athenagoras to counter the ROC, to establish the primacy of the Phanar and get closer to the Vatican his own initiative or "the execution" of the CIA task? Who is the end beneficiary of all these activities?

And if we look at the actions of today's head of the Phanar, Patriarch Bartholomew (Arhondonis), we can easily notice that they also boil down to these three areas: counteraction to the ROC, the establishment of the primacy of Constantinople and rapprochement with the Catholics. And just like under Patriarch Athenagoras, American authorities and special services play an active role in this activity.

For example, during a recent visit to Ukraine, U.S. Secretary of State Mike Pompeo not only expressed open and exclusive support for the Orthodox Church of Ukraine but also agreed to fund it through the "Metropolitan Fund" established by the head of the OCU Epiphany Dumenko. It was Pompeo who was the Director of the CIA when the Phanar made a policy decision to launch the OCU project.

And the fact that the Patriarchate of Constantinople went against church canons to create the OCU may say that in due time they may publish the correspondence of Patriarch Bartholomew (Arhondonis), in which he also assures his American patrons of his readiness "to submit to any task and make every possible sacrifice”.

0 0
Share
Patriarchate of Constantinople Patriarch Bartholomew USA US Department of State Phanar
If you notice an error, select the required text and press Ctrl+Enter or Submit an error to report it to the editors.
Read also

"Expertise" of UOC Statute from State Ethnopolitics: to see the non-existent 02 February 13:32

What do the persecutors of the Church keep in their cupboards? 05 January 14:03
News