The Orthodox Church of Cyprus began collecting signatures in defence of the rights of UOC in order to file a lawsuit with the European Court of Human Rights. This was announced on June 25, 2019, at the Kiev-Pechersk Lavra by Metropolitan Isaiah of Thamasos in his address to the President, the government, the Ukrainian parliament at the end of the celebrations of the name day of His Beatitude Metropolitan Onuphry of Kiev and All Ukraine.

On June 27, the former UOC Metropolitan Alexander (Drabinko) published on his Facebook page two posts, in which he called the statement of the Cypriot hierarch “another provocation”.

“I imagine the statements that the Cypriots would make if the Ukrainian hierarch declared the claims of Muslims in Cyprus! And even more, made an appeal in this regard to the authorities of Cyprus! What a provocation !!!” he wrote in one of the publications. 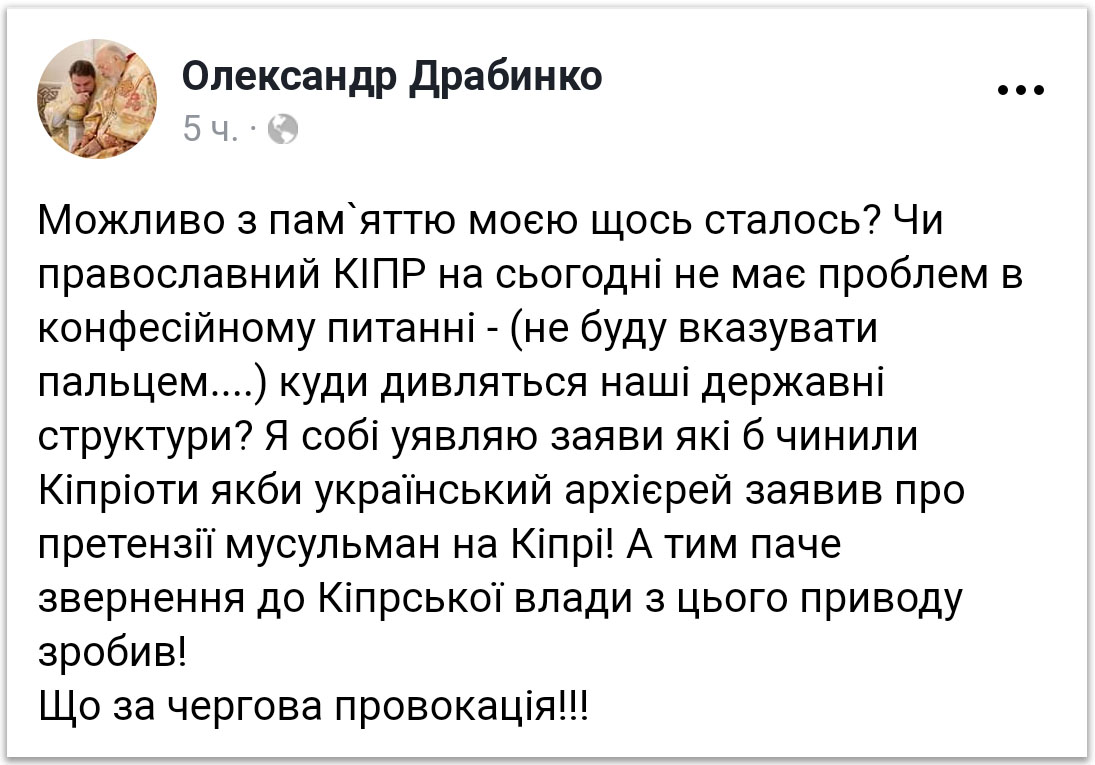 That very day, Vladyka published another post on the same problem, in which, among other things, he said: “If Cypriots collect votes in Europe and it will probably have some (public-theoretical) significance, then why can’t the Ukrainian people take a decision in a referendum – which Church should be in Ukraine - the Moscow Patriarchate, or the Orthodox Church of Ukraine? The policy of double standards is amazing! <...> Where is our Foreign Ministry and its reaction?”

Soon after the publication, the ex-Metropolitan deleted both messages from his page. But the screens do not burn. Because once you say it, it can’t be unheard. The remark was already out and no apology or clarification followed.

Let's try to analyze these texts by the metropolitan banned from priesthood.

The first thing that catches tour attention is an unusual harshness of the statements of the OCU “hierarch” in relation to the ancient and authoritative Church, from which, by the way, the new religious structure of Ukraine expects recognition.

On the other hand, if a member of the Orthodox Church feels that he is right, he has every right to incriminate his brother lawlessness. What kind of iniquity did Metropolitan Isaiah do?

So, the ex-Metropolitan Alexander criticizes the hierarch of the Cypriot Church for the fact that he stood up to defend the UOC believers whose temples are taken over by OCU raiders. Drabinko likens believers of the Ukrainian Orthodox Church (the very ones whose pastor he has been quite recently) to the Muslims of Cyprus. Well, the comparison is actually good! Established at the so-called “Unification Council”, the Orthodox Church of Ukraine, which seizures UOC temples, is far from the Orthodox Church as much as Islam is.

In this, Vladyka Alexander is right. But in all other respects, he makes a logical substitution and shows the example of those double standards that he criticizes in his post.

When the Church of Constantinople really intervened in the internal church affairs of Ukraine – roughly intervened! – Vladyka Alexander applauded Patriarch Bartholomew, saying that he was serving the ministry of peace and love. For the Metropolitan, the position of the UOC and the ROC, which was clearly expressed in official documents, did not matter. Neither did the choice of the UOC laity, who sent a written request to Patriarch Bartholomew not to interfere in their church affairs.

The ex-Metropolitan recognized the illegal actions of the Patriarchate of Constantinople on the canonical territory of the UOC, although these actions brought Ukraine not only church turmoil but grief, pain, and tears of ordinary people. Now, when one Local Church only wants to stop the seizures of temples of another Local Church through legal proceedings, he calls it a provocation.

Once again, the metropolitan, a monk, whom the Church has placed on the top of preacher's service, does not notice the obvious moral, and often physical, sufferings of his Orthodox brethren – Ukrainians, citizens of the state that ex-Metropolitan so respects.

It is difficult to assess the spiritual state of a person who is still considered the canonical bishop of the Church. However, it is hardly possible to consider such cynical indifference towards even strangers, not to mention fellow believers, as the norm for a bishop. After all, even non-believers are sometimes horrified by what is happening in Ukraine’s church life today.

Emotional appeals of the current “hierarch” to the state bodies of Ukraine are especially surprising in this connection: “Where are our government structures looking? <...> Where are our MFA and its reaction? The Ukrainian Church is separated from the state, but as it turns out not in Europe? Who allocates money to collect signatures?”

And it’s not even the fact that the ex-Metropolitan is quite tough enough to rein in the "presumptuous Cypriots". The problem is in the absolutely amazing anti-church character of his mindset.

Metropolitan Isaiah of Thamasos, making his statement of support for the suffered UOC believers whose temples were taken away argued his words in the following way: “We raise our voice and at the same time express protest together with the voice of millions of the Orthodox around the world who share our sadness – Ukrainians, Europeans, Greeks, Cypriots, Arabs, Serbs, Poles, Czechs, Slovaks, Bulgarians, Romanians, Americans, Russians, Georgians, Albanians and many others. Because we are all members of the one Body of Christ our Lord. And when one member of the body is painful, all the members of this body feel pain.”

So, the Church in the world is one – we all are its members. Members of Greek, Cypriot, Romanian, Russian, Ukrainian, etc. – all members of the one Church, one Body of Christ. Accordingly, the persecuted Ukrainians, as well as Metropolitan Isaiah, are members of the ONE Church. The Apostle Paul wrote: “For just as each of us has one body with many members, and these members do not all have the same function, so in Christ we, though many, form one.” (Rom. 12, 4-5).

What did banned Metropolitan Alexander do? He is indignant at the fact that the hierarch of the Church of Cyprus “interferes” in the affairs of the supposedly “alien” to him Ukrainian Church, according to Drabinko. And here the main problem is not even in the moral qualities of the ex-Metropolitan, who considers violence against believers of the UOC to be normal. Here is rather the tragedy of a man who has risen to the metropolitan but did not understand that the nature of the Church and the political state is not at all identical, the tragedy of the “hierarch” who literally understands the slogan: “An independent Church – to the independent state!”, a person who believes that the Church is an isolated structure identical to the state, separated from the fullness of Orthodoxy.

If we follow such a metropolitan logic, then as the political map of the world changes, the composition of the Universal Church must change, both quantitatively and nationally. If we bring this idea to the end, then the number of Local Churches should correspond to the number of states in the world — that is, about two hundred. Every nation should have its state, and every state – its Church. And the state bodies of each state should vigilantly ensure that “foreign” Churches do not interfere in the affairs of “their own” and in the event of such intervention submit resolute protests.

Does this logic correspond to the thinking of a church bishop? The question is perhaps rhetorical.

However, the negative and emotional reaction of the ex-Metropolitan Alexander to the readiness of the Church of Cyprus to appeal to the European Court for the help of the UOC is genuinely surprising. After all, he himself has recently filed a lawsuit against His Beatitude Metropolitan Onuphry and members of the Synod of the UOC, seeing in the official church documents an insult to his personality! “They should be responsible for slander in court, and not on the Internet pages,” the offended bishop commented on his move.

It turns out that when legal proceedings are initiated to stop the violence, this is a provocation. And to sue the elder-metropolitan, who endured and pitied him, turns out to be a response for slander. What’s happened to Vladyka Alexander’s conscience? Is it alive?

What the Cypriots saw in Ukraine caused a shock with them and a desire to help suffering people, but the notorious hierarch has the confidence that seizures of temples are normal.

“The wicked make themselves a stench and bring shame on themselves” (Prov. 13, 5), says the Holy Scripture. Shame not only with deeds but also with words, we can add. With his publications and actions, the odious hierarch once again proved the correctness of the decision of the Holy Synod of the UOC, which banned Metropolitan Alexander from priesthood till his repentance. Indeed, a person in such a confused state cannot be a priest and a metropolitan.

It is worth saying that it is not just the Drabinko case. Analyzing his way, one can draw global conclusions about the impairment of thinking of the schismatic environment. After all, Alexander started well and was a favourite of the late Metropolitan Vladimir. In his time, he even wrote anti-schism studies “Orthodoxy in Post-Totalitarian Ukraine (Historical Milestones)” and especially “Why are schismatic groups in Ukraine called non-canonical”. But, as he communicated with dissenters and supporters of autocephaly, he began to change. You can already see what this change has led to.

The Church is wise. And it is not for nothing that it defines very strict punishment for falling into schism. The Holy Fathers understood how schism darkens the heart of man, which is not the case for the present-day time when liberal theologians are trying to annul the very notion of schism by legalizing it.

God grant repentance to all those who have fallen into schism so that they eventually return to their spiritual mother – the Church.

0 0
Share
UOC Local Churches about Ukraine Metropolitan Alexander (Drabinko) Rights of believers Orthodox Church of Cyprus OCU
If you notice an error, select the required text and press Ctrl+Enter or Submit an error to report it to the editors.
Read also

Fight against the Church: from the "enemy" image to a razor to the throat 03 January 14:14