Is a Local Church to be: What Poroshenko brings back from Constantinople

Should we expect the religious landscape to be redesigned?

On April 9, on Monday of the Bright Week, Petro Poroshenko met with Constantinople Patriarch Bartholomew in his residence in Istanbul.

At first sight, it might seem the process of establishing a Single Local Church (SLC – Author) in Ukraine by the “blessing” of Patriarch Bartholomew has reached its final stage. Before this state agents of the lower rank had begged Phanar about having a SLC: Speaker of the Parliament A. Parubiy, Prime Minister V. Groysman, as well as former Presidents L. Kravchuk and V. Yushchenko. Representatives o the Ukrainian diaspora in the USA also visited the Phanar regarding an autocephaly issue. Finally, the visit was paid by the President himself.

Regarding the negotiations with the Patriarch of Constantinople, the presidential press service reported the following: "President of Ukraine Petro Poroshenko during his visit to Turkey held a meeting with Ecumenical Patriarch Bartholomew I". Then they exchanged Easter greetings, P. Poroshenko told about his trip to Donbass, and Patriarch Bartholomew assured, "We pray for peace in Ukraine." As for the SLC, it is mentioned only in the latest paragraph of a scarce report about the visit on the president's website, "The President of Ukraine also noted the importance of establishing a Single Local Orthodox Church in Ukraine, which the Ukrainian people are striving for."

What does it mean when translated from the diplomatic language?

It means exactly that there was no progress, actual or anticipated, on the issue of SLC, or even opening metochions of Constantinople Patriarchate in Ukraine. P. Poroshenko just called on Patriarch Bartholomew to congratulate him on Easter, since he was on a visit to Turkey. If there was at least a distant hint that Phanar was ready to break the ice with the Kiev authorities, they would have already trumpeted about it on every corner. The authorities, in view of in the run-up to the early elections, need like air some achievements or at least their semblance. For example, as we have already said, after Turkey, the President of Ukraine went to Germany. And in the video on Facebook, he did not fail to note that the meeting with him is one of the first meetings of the newly-formed government of Germany with foreign leaders. 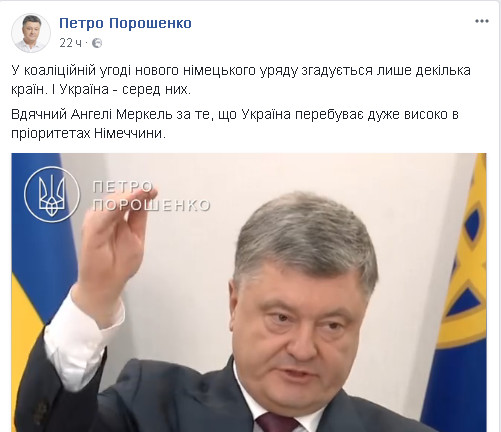 Yes, there is something to be “proud” of! But for the fact that Germany fights to the bitter for "Nord Stream-2", designed to destroy the transit Ukrainian gas pipeline. But still hype is hype and to mention that the President of Ukraine for A. Merkel is almost the first foreign leader, with whom she meets after the formation of the German government, is necessary for sure. An achievement in hand! However, there is nothing similar to that with Patriarch Bartholomew. Just a scarce message that "the President of Ukraine also noted the importance of establishing a Single Local Orthodox Church in Ukraine". How much is this dissonant with the President's words in last year's address to the Verkhovna Rada: "Let the leadership of the Ecumenical Patriarchate also hear us. I want to once again draw the attention of His Holiness to our most serious intentions, to the Ukrainian leadership's firm political will to solve this problem, which, unfortunately, has been on the agenda since 1991. Ukraine has the right to the Local Church."

Yes, the intentions were serious, and the UOJ already wrote it would be very desirable for P. Poroshenko to ask the Patriarch of Constantinople for his consent to the SLC precisely for the 1030th anniversary of the Baptism of Rus. It could be a very beautiful picture. Nothing is reported at all on the possibility of opening Phanar's metochions in Ukraine. Should there be any of such opportunities, it would be immediately reported as an achievement of P. Poroshenko.

An intrigue with metochions is alive, though the UOJ has already cited arguments proving it is highly unlikely. And the assurances of Mr. Yurash, head of the Department for Religions of the Ministry of Culture, that they will be opened on the basis of the UOC-KP or UAOC, in general come from the realm of fantasy. Hypothetically, it is possible to admit the existence of such churches in the territory, for example, of the Kiev-Pechersk Lavra, but again the question arises: why?

However, it seems that the idea with the Single Church had to be postponed to the "best" times. P. Poroshenko will not be able to have it as his asset in the future before the upcoming elections. But on the horizon looms a much rosier prospect. It is about introducing the UN peacekeeping mission to Donbass. It is the reason why P. Poroshenko flew to Turkey and Germany. He pursued a specific policy, not just "congratulations on Easter". The Ukrainian President was immediately received by two main leaders of Turkey – President R. Erdogan and Prime Minister M. Çavuşoğlu.

This suggests that the conversation was indeed serious. They talked mostly about peacekeepers. "Turkey supported the deployment of the UN peacekeeping mission in the occupied part of the Donbass and declared its readiness to participate in it," reported the press-service of the Ukrainian President. This is not the achievement of the desired result, but a very big step in the right direction. It is absolutely clear that without the consent of Russia, there will not be peacekeepers in the Donbass, because Russia has the right of veto in the UN Security Council and can block any resolution.

There is basically such an agreement, but the discussion is on such important issues as the national composition of the peacekeepers, the territory where they will be deployed and their mandate, that is, the tasks, powers, the right to use weapons (in which cases and against whom). Turkish troops can make up a significant part of peacekeepers. On the one hand, it is a NATO country, bound by the relevant treaty obligations to Western partners. On the other hand, Turkey now has very good relations with Russia. Having received approval of his efforts from R. Erdogan, the Ukrainian president flew to A. Merkel.

But in Turkey, P.Poroshenko also approached another issue: the supply of gas to Ukraine. This is how the President's website reports: "Separately, key areas for deepening bilateral cooperation in trade, economic and investment spheres, as well as opportunities for implementing joint projects in the energy sector, were discussed. Among other things, it was a question of trilateral cooperation between Ukraine, Turkey and Qatar." The current president of Ukraine is trying to solve a task that the former president was not able to do. We are talking about the supply of Qatar's liquefied gas to Ukraine. In order for this channel to work, it is necessary, as it turned out, not only to build an LPG terminal in the Odessa region, but also to agree with Turkey on the passage of tankers through the Bosporus. The fact is that the Black Sea straits are greatly overloaded, the shipping is very intensive and the risk of accidents is high. And if we are talking about tankers, then such an accident will simply have catastrophic consequences. Therefore, Turkey is very cautious in this matter. The question is complex, almost unresolved, but the fact that P. Poroshenko touches it is already commendable.

But let us return to the peacekeepers. In Germany, the Ukrainian president was also received at the highest level. He held meetings with German Foreign Minister Heiko Maas and left for a meeting with Chancellor A. Merkel.

Thus, the resolution of the issue with peacekeepers can be even closer. Moreover, given that before the meeting with P. Poroshenko, Ms. Merkel talked about this with the Russian President, as reported by the press services of the leaders of the two states.

So we can wish P.Poroshenko good luck in the negotiations and hope that a long-awaited peace will come to Ukraine along with peacekeepers. In this case, the President will be able to say that he fulfilled his main pre-election promise of 2014: to finish the war in the Donbass. Let it take almost five years, instead of the promised three days, but who will pay attention to this?

And here the state may need a real, not ostentatious cooperation with the Ukrainian Orthodox Church. The fact is that in the event of the introduction of peacekeepers and the holding of legitimate local elections in the Donbass, there may be a kind of power vacuum, or at least a shortage of channels for interaction with the population. The military administration, represented by peacekeepers, firstly, will not be able to solve all vital issues of people, and secondly, the population will most likely treat these peacekeepers with caution, if not hostile. There is a very high probability of all kinds of provocations on the part of those who do not desire peace. And in these conditions, the peacekeeping role of the UOC can be simply invaluable. Roman Bessmertny announced the idea of transferring certain state functions to the Church in the Donbass on March 23 during the round table: "International Transitional Administrations – Experience, Prospects and Risks for Ukraine" at the Ukrinform Agency.

0 0
Share
Patriarchate of Constantinople Patriarch Bartholomew Petro Poroshenko
If you notice an error, select the required text and press Ctrl+Enter or Submit an error to report it to the editors.
Read also

Fight against the Church: from the "enemy" image to a razor to the throat 03 January 14:14