NGO "Miriane" and parishioners of the Ukrainian Orthodox Church have brought bills against the persecution of the Church to the Verkhovna Rada and the OP.

On June 15, representatives of the public association "Miriane" brought to the Verkhovna Rada two bills aimed at protecting the rights of UOC believers. They called on the Ukrainian Orthodox to join the prayer standing at the walls of the Parliament to support this initiative. Then the bills were submitted to the Office of the President. The UOJ is broadcasting the events live.

The "1Kozak" channel’s live stream of the prayer standing:

The broadcast is over.

11:50 am To the exclamations "Christ is risen – truly, He is risen!", the believers begin to disperse.

11:47 Archbishop Nikolai (Pochtovyi) of Vasylkiv says that the statement of the believers is accepted, and it remains to be hoped that the authorities will consider it.

11:42 The believers sing the Troparion of the Resurrection of Christ at the OP.

11:31 A representative of the OP goes out to the believers and says that he will now forward the appeal to the Secretariat.

11:00 The column of believers reaches the President's Office. Now it sounds here: "Christ is risen – truly, He is risen!"

10:58 Moleben participants share with each other their joy at how the words about Christ drown out nationalist сhants. According to believers, the evangelical preaching of love is the strongest possible response to radical aggression.

10:49 A couple of times timid "Glory to the nation – death to the enemies!" sounded near the walls of the Rada, but the believers set off singing for the Office of the President.

10:48 Believers singing "Christ is risen from the dead, trampling down death by death ..."

10:47 The Easter greeting does not subside over the crowd of believers.

10:42 Radical nationalists appear near the Parliament, shouting out "Glory to Ukraine - Glory to the heroes!" However, their cries are drowned in the answer of the Orthodox: "Christ is risen – truly, He is risen!"

10:41 Another topic for the conversation with the President is his invitation to Ukraine of Patriarch Bartholomew of Constantinople. Makarovsky recalls that according to the head of the OP, Andrei Yermak, almost all Ukrainians are looking forward to the arrival of the head of Phanar. However, it was Patriarch Bartholomew's support for the OCU exacerbated interfaith conflicts in Ukraine. And after his arrival, as The NGO "Miriane" fears that his arrival will only cause a new wave of the seizures of UOC temples.

10:39 The head of the NGO "Miriane" Vasily Makarovsky says that now believers are going to the Office of the President to hand over the bills to Vladimir Zelensky.

10:36 The people's deputy from the ‘Servant of the People’ faction, a representative of the parliamentary association "For Interfaith Peace in Ukraine" Alexander Kachura makes a speech. He states that thanks to today's moleben, the deputies should hear the voice of believers and ensure the requirement of the Constitution – non-interference of the authorities in the affairs of the Church.

10:33 MP from the “Opposition Bloc” Vadim Novinsky comes out to the believers. He takes the bills and promises to help pass them.

10:12 The deputy head of the UOC DECR, Archpriest Nikolai Danilevich, notes a large number of believers at the Verkhovna Rada.

09:58 Another bishop participating in the prayer standing is Bishop Tikhon (Sofiychuk) of Gostomel.

09:48 The participants in the prayer standing note a great number of security officials. 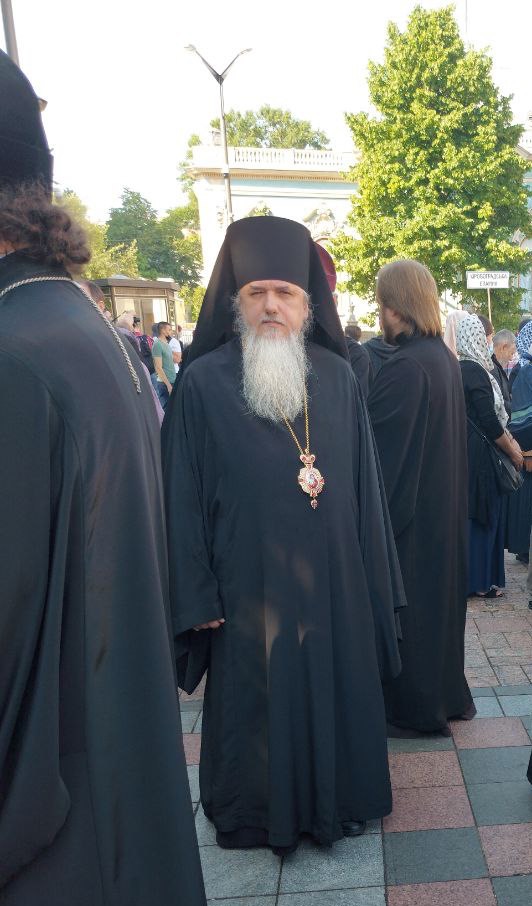 09:34 A prayer began at the walls of the Parliament.

09:34 Archbishop Nicholai (Pochtovyi) of Vasylkiv takes the floor. He says that since the receipt of the Tomos by the OCU, schismatics have seized hundreds of churches of the Ukrainian Orthodox Church, and this is a shame for Ukraine. By pandering to these seizures, the government itself puts its citizens in opposition to the state. The voice of believers must be heard.

09:31 The head of the NGO "Miriane" Vasily Makarovsky speaks of the essence of the laws that his organization proposes to adopt. They must abolish anti-church laws aimed at discriminating against the UOC.

09:25 Believers from different eparchies of the UOC gathers for the prayer standing.

09:15 The “Miriane” initiative attracted a lot of the clergy. Archbishop Iona (Cherepanov) of Obukhiv joins the prayer standing.

09:06 Bishop of Kassian (Shostak) of Ivankiv, the abbot of the St. Michael Zverinets Monastery, also arrives.

08:53 Representatives of the NGO "Miriane" brought the signatures of more than a million believers under the bills aimed at stopping the persecution of the Ukrainian Orthodox Church.

08:48 Security officials have already lined up in Mariinsky Park.

08:44 Laymen and clergy gathering near the Verkhovna Rada.

As reported, the Miriane project calls on the believers of the UOC to stop being a silent and invisible majority and take an active position – for the faith, traditional values and the Church.

0 0
Share
UOC Anti-Church Law Church and power Verkhovna Rada Persecution of the Church Church and society Volodymyr Zelenskyy
If you notice an error, select the required text and press Ctrl+Enter or Submit an error to report it to the editors.
Read also

Searches in UOC: what was sought out, found, and what will happen next
19:35