After the presidential election held on August 9, there are mass protests in Minsk and several other cities of Belarus, accompanied by clashes with the police.

An OCU "priest" and active supporter of ex-President of Ukraine Petro Poroshenko, Alexander Dediukhin, who has repeatedly urged the Ukrainians to mass protest, advised to go to the Belarusian capital to "have a hot" prayer for the Belarusian brothers.

"Listen, Facebook expert. The best thing you can do now is to pray for the Belarusian brothers. Of course, you can also go to Minsk and support the protests, but it's only to make your prayer hotter," wrote Deduukhin on Monday, August 10, on his Facebook page. 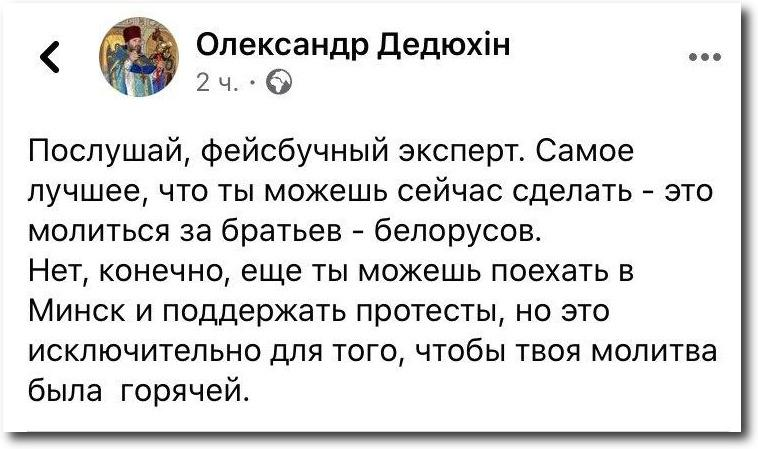 The idea was developed in comments under the post of the OCU representative: "for the prayer to be hotter, you need to go with a Molotov cocktail”.

As reported, earlier, during the action against the investigation of Poroshenko's crimes, Dediukhin told an anecdote about the prayer "Our Father" and quoted the paraphrased Nazi slogan "Drang nach Osten".

0 0
Share
Action Prayer Belarus OCU
If you notice an error, select the required text and press Ctrl+Enter or Submit an error to report it to the editors.
Read also

Searches in UOC: what was sought out, found, and what will happen next
19:35