“Patriarch of All Rus” again: new decree of Filaret published

The leader of the "self-dissolved" Kiev Patriarchate once again reminded of his "patriarchal" status.

On January 16, 2018, Filaret decreed to commemorate him as the “Patriarch of Kiev and All Rus-Ukraine” alongside “Metropolitan” Epiphany. This is stated in a document published on January 19 by Protodeacon Andrei Kurayev on his Facebook page.

In the document, Filaret blesses during the divine service to make a liturgical mention first of "His Holiness Filaret, Patriarch of Kiev and All Rus-Ukraine", followed by "His Beatitude Epiphany, Metropolitan of Kiev and All Ukraine and the ruling Bishop". Filaret refers to the “Unification Council”, which took place on December 15, 2018, as the reasoning of this decree.

As is known, the "Council" resulted in the emergence of a new structure – the Orthodox Church of Ukraine. However, in the Filaret-designed document the name of OCU does not appear at all. In the text of the decree, the newly formed church structure is called the “Ukrainian Orthodox Church”.

It is noteworthy that the document was printed on the letterhead of the Kiev Patriarchate, which had been ostensibly dissolved before the “Unification Council”. However, the official documents on the self-dissolution of the UOC KP have not yet been submitted. 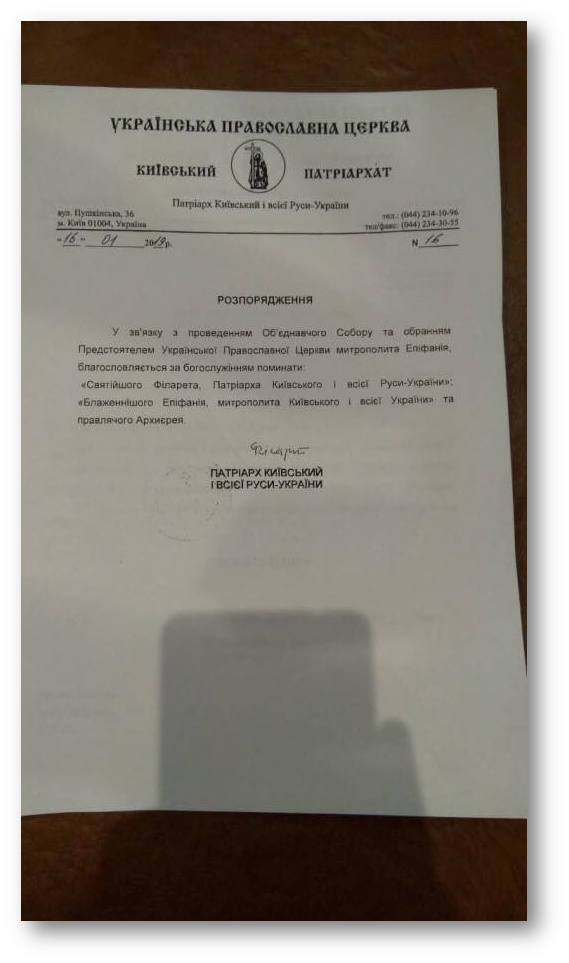 “He used to make such self-affirming decisions at least through the synod,” commented Fr. Andrey Kurayev. Now he does everything himself. By the way, he cannot remember the name of the OCU. But for the two whole weeks he has frugally signed up as a retiree – ‘Patriarch Filaret’ without specifying the chair."

Recall that to participate in the “Unification Council” on December 15, Filaret agreed, at the request of the Phanar’s Exarch, to remove his “patriarchal koukoulion” but then put it on again. Subsequently, Filaret would repeatedly state he continued to consider himself a patriarch and was going to manage the OCU with Epiphany.

As the UOJ reported, Archbishop Daniel of Pamphilon said that for members of the OCU, Filaret could be considered a spiritual grandfather and patriarch, but for all the others he is the former metropolitan of Kiev.