Protopriest Alexander Bakhov, Chairman of the UOC Legal Department, commented on the information wave about the “mass” transition to the OCU.

Transfers of religious communities to the newly created OCU, which are in the focus of the Ukrainian media, do not legally exist, as, by the way, the OCU itself. The head of the Legal Department of the Ukrainian Orthodox Church wrote about this on his Facebook page.

“Today, there has been a wave in the media that they have massively (about 70 parishes) "transferred" to the so-called Orthodox Church of Ukraine," Fr. Alexander wrote. “Where are the 70 statutes of the parishes that "transferred"? Perhaps these “transfers” are just as virtual as the so-called Orthodox Church of Ukraine, and only exist in the media to create hype? After all, these “transfers”, like “OCU” legally do not exist.”

The lawyer also drew attention to the fact that it is impossible to talk about some kind of “mass ‘character” if we are talking about 70 parishes that supposedly moved to the new church structure, out of almost 13,000 parishes of the UOC.

At the same time, the clergyman wonders why the parishes of the Ukrainian Orthodox Church should be transferred to the OCU, which "‘UOC KP’ and ‘UAOC’ created for themselves".

“I have not seen a single report that parishes of the ‘UOC KP’ and the ‘UAOC’ are massively transferring to the ‘Orthodox Church of Ukraine’. Maybe they are shy and they need help?” asked the representative for the UOC. 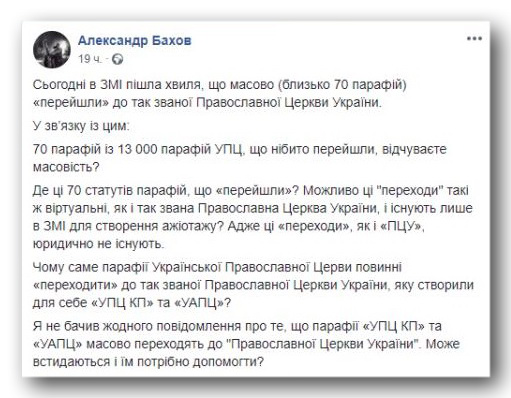 As the UOJ reported, Andrei Yurash, head of the Department for Religious Affairs and Nationalities of the Ministry of Culture, accused the UOC that when it comes to voting for a change of jurisdiction, the UOC considers members of the religious community only “10 old women” who work in the temple.

0 0
Share
UOC UOC KP UAOC Protopriest Alexander Bakhov OCU
If you notice an error, select the required text and press Ctrl+Enter or Submit an error to report it to the editors.
Read also